An African hunting safari is a adventure that, in many cases, comes along only once in a lifetime. South Africa is one of the premier destinations for both first-time and seasoned safari hunters.

South Africa has an amazing diversity of species – more than 45 major plains game species and all of the Big Five may be hunted here. A large variety of game birds, some presenting very challenging shooting, are on licence with generous bag limits. South Africa has so much to offer and every foreign hunter, regardless of specific requirements or preferences, will find a suitable hunting destination to meet their needs!

Huntingafrica.com takes pride in having the finest African outfitters and professional hunters as partners. 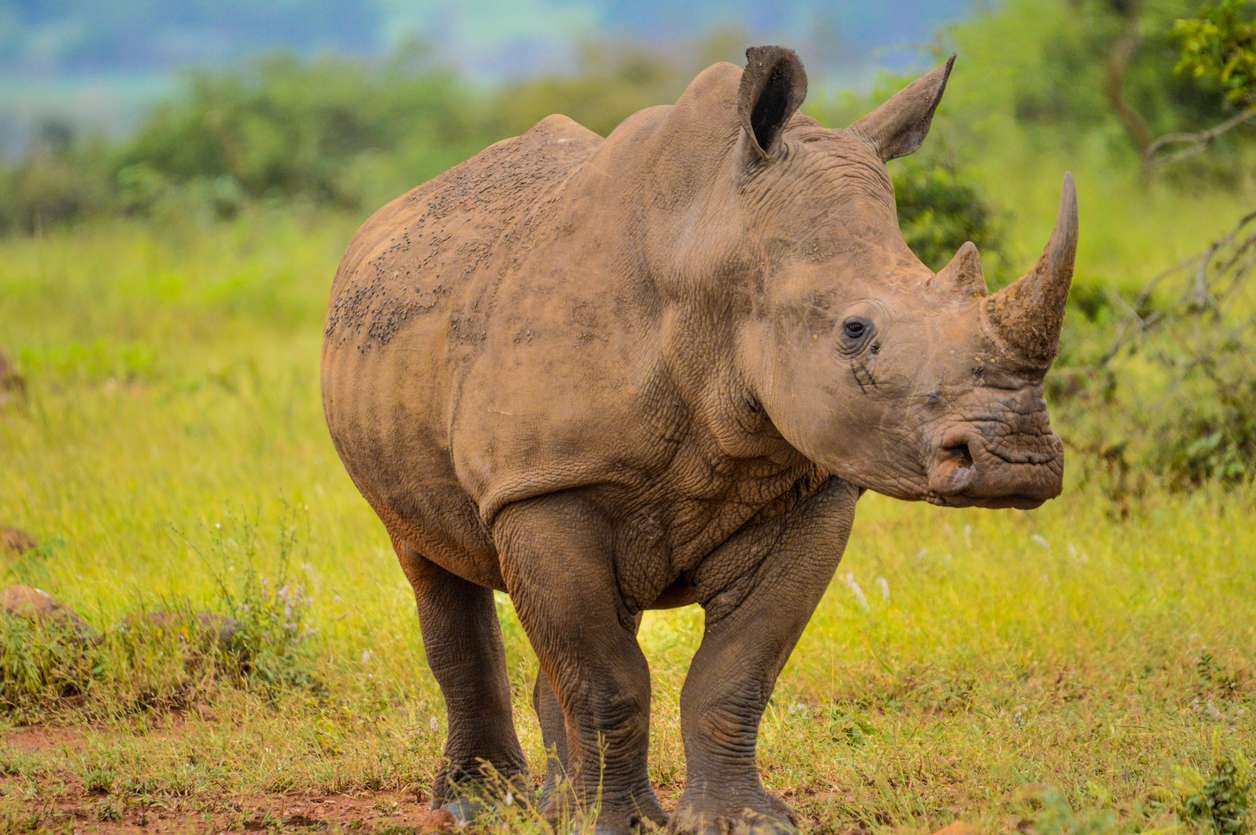 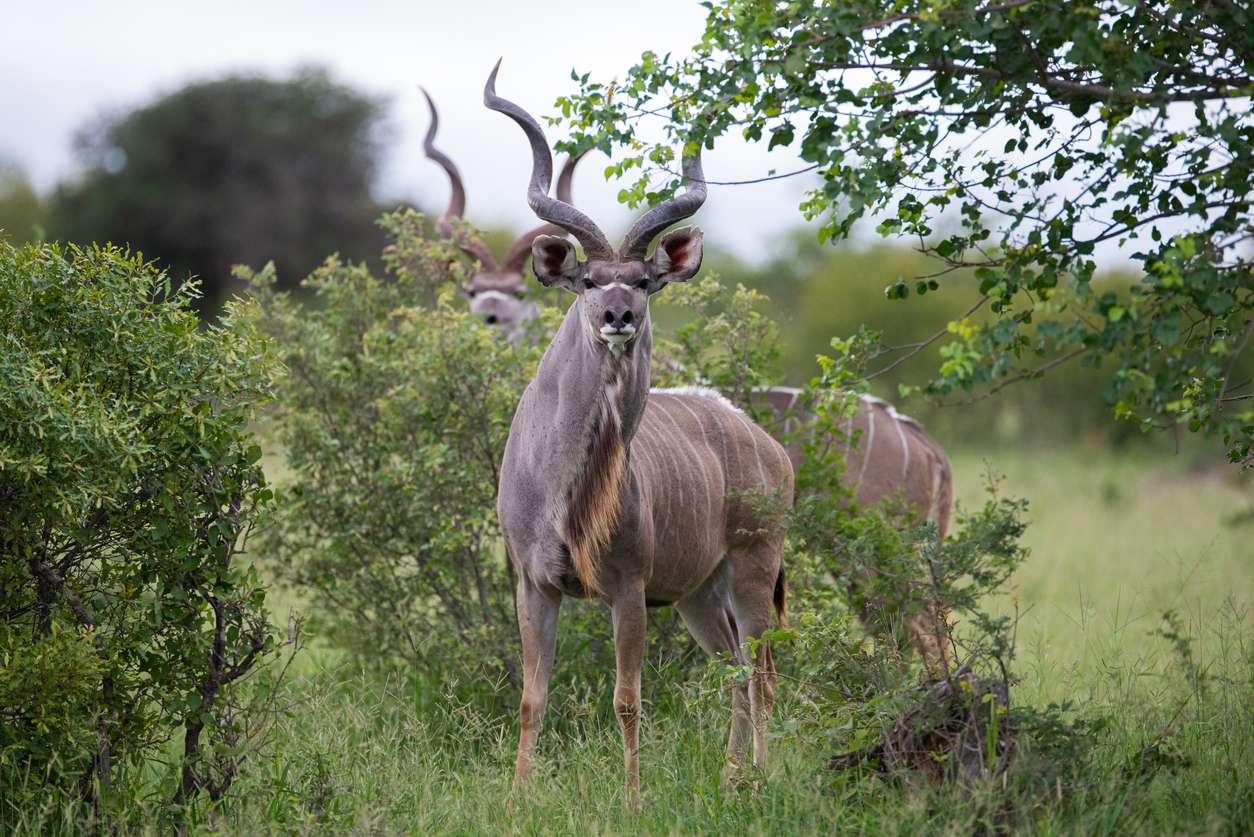 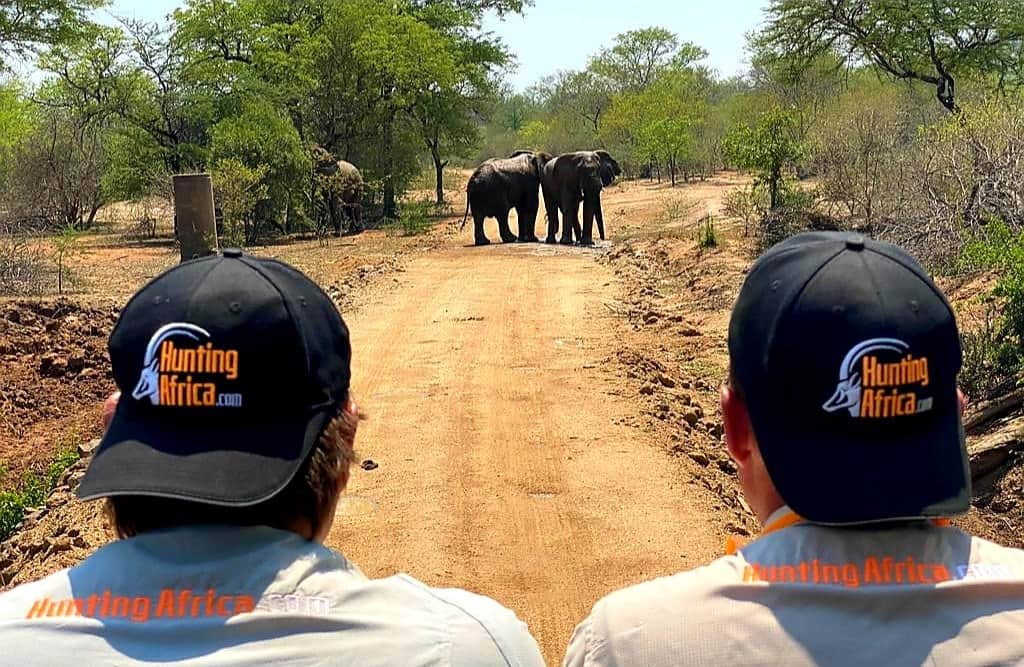 Things You Need to Know About Hunting in South Africa

Travelers from the USA and most European and British Commonwealth countries are not required to have a visa to enter South Africa. Find out the visa requirements for your country here: http://www.dha.gov.za/index.php/immigration-services/exempt-countries.

Special requirements apply for children under the age of eighteen who are traveling to South Africa. Minors are required to produce, in addition to their passport, an Unabridged Birth Certificate (showing the particulars of both parents) when exiting and entering South African ports of entry. When a child travels with only one parent, additional documents should include an affidavit in which the absent parent gives consent for the child to travel, a court order granting full parental responsibilities or legal guardianship of the child, or the death certificate of the absent parent.

Most of South Africa is malaria-free, but malaria is present in a few areas, including northeastern KwaZulu-Natal Province as far south as the Tugela River, Limpopo (Northern) Province, and Mpumalanga Province. It is also present in Kruger National Park. If you will be hunting in or traveling to those areas, malaria prophylaxis is recommended.

South Africa has strict rules for hunters bringing firearms into the country. Visitors who are hunting or participating in a shooting event must acquire a Temporary Import Permit. These can be obtained on arrival at the airport at the SA Police Firearm Office situated after immigration. There are also a number of commercial services that can secure your permit in advance for a fee.

To be issued a permit, you will need to show proof of ownership of your firearm(s) (for American hunters, a U.S. Customs Form 4457 is sufficient), as well as an invitation letter signed by your outfitter proving that you have booked a hunt in South Africa.

Each hunter is allowed to bring up to four firearms, but no two may be of the same caliber. Ammunition is limited to 200 rounds per firearm. It is advisable to pack your ammunition in a hard-sided, lockable case, as sometimes airlines will require you to check your ammunition separately.

Most hunters arriving from outside of South Africa arrive in Johannesburg. Here, all declared or identified firearms may be collected directly from the firearm office just after immigration. Any firearms either not declared upon departure, or not identified by an appropriate label will be delivered to the normal baggage carousel for collection. Once you have collected your baggage, proceed to the SA Police Firearm Office, where all necessary import permits and other documentation will be finalized. This process can be quite time-consuming, especially if many other hunters have arrived on the flight with you, so if you have a connecting flight it is advisable to allow at least three hours in between.

If you have a domestic connecting flight, you must clear firearms and ammunition at the SA Police Firearm Office in your arrival airport before proceeding through customs. You will need to present your Temporary Import Permit to board your domestic flight. It’s important to note that firearms are accepted on domestic flights only to certain airports within South Africa; check with your outfitter to ensure you will be able to check your firearm to your destination.

Most hunts in South Africa are spot-and-stalk or safari style, with the hunters covering ground either on foot or by vehicle and, once an animal is spotted, completing a stalk on foot. Terrain varies dramatically from relatively flat savanna to rugged mountains, depending on the region of the country you’re hunting. Some safaris can require extensive walking; others require very little, so it’s a good idea to ask the professional hunter.

Dark green or brown clothing is best, as are comfortable, well-broken-in boots with soft soles for quiet stalking. You’ll only need a couple of changes of clothing as laundry is done daily at most camps. Bring a wide-brimmed hat, sunblock, good optics, and a jacket for cool mornings and evenings. In some areas pepper ticks are a problem, so tick repellent is a good idea.

Most professional hunters recommend rifles in the .300-caliber family for plains game and .375 for dangerous game, but the most important thing is to bring a rifle you are familiar with and can shoot well.

Tips are appreciated at most safari camps in South Africa; in addition to the professional hunter, tracker(s), driver, and skinner(s), there are usually staff members at camp who handle cooking and cleaning and other chores and help to make a hunter’s stay pleasant. The professional hunter or outfitter can advise the hunter how much is appropriate to tip each staff member.

Typically, animals are skinned at the safari headquarters and all skins are cleaned and salted; skulls and horns are cleaned and buried in salt. After a couple of days, the skins are hung to dry, cleaned once more, and folded and stored in a skinning shed. Skulls will be cleaned and placed on a rack. Before leaving camp, it’s a good idea to ensure the skulls and skins are properly tagged with the hunter’s name and contact information.

Once the hunter departs, or sometimes at the end of the season, trophies will be taken to a taxidermist for professional cleaning and dipping, which is required for export. The taxidermist then contacts the hunter for instructions regarding preparation and shipment, and to arrange payment for these services. The taxidermist then contacts a shipping agent, who will handle the permits and shipping to the hunter’s home country, again after contacting the hunter. Hunters should check the latest regulations in order to make arrangements in advance if they are hunting species that require CITES permits or special export or import permits from the hunter’s home country. Many export and import requirements for these species have undergone dramatic changes in the past couple of years. 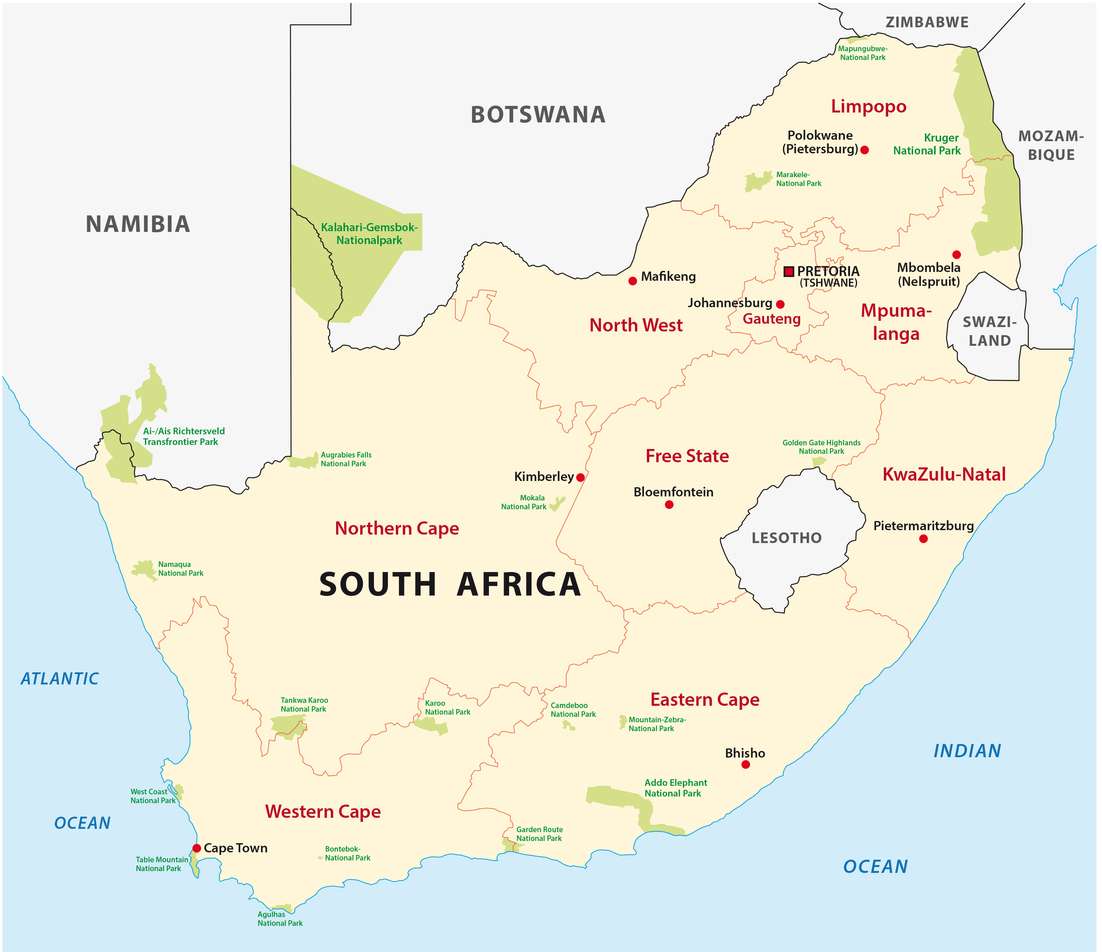 Limpopo is the northernmost province of South Africa. It is named after the Limpopo River, which forms the province’s western and northern borders. The name “Limpopo” has its etymological origin in the Sepedi language, meaning “strong gushing waterfalls”. The capital is Polokwane, a Sepedi word meaning “place of safety”

Limpopo shares borders with Botswana, Zimbabwe and Mozambique. It’s known for bushveld and wildlife reserves, including part of Kruger National Park. West of the Kruger are the craggy Blouberg mountains and Makgabeng Plateau with ancient rock art. Near the provincial capital Polokwane. 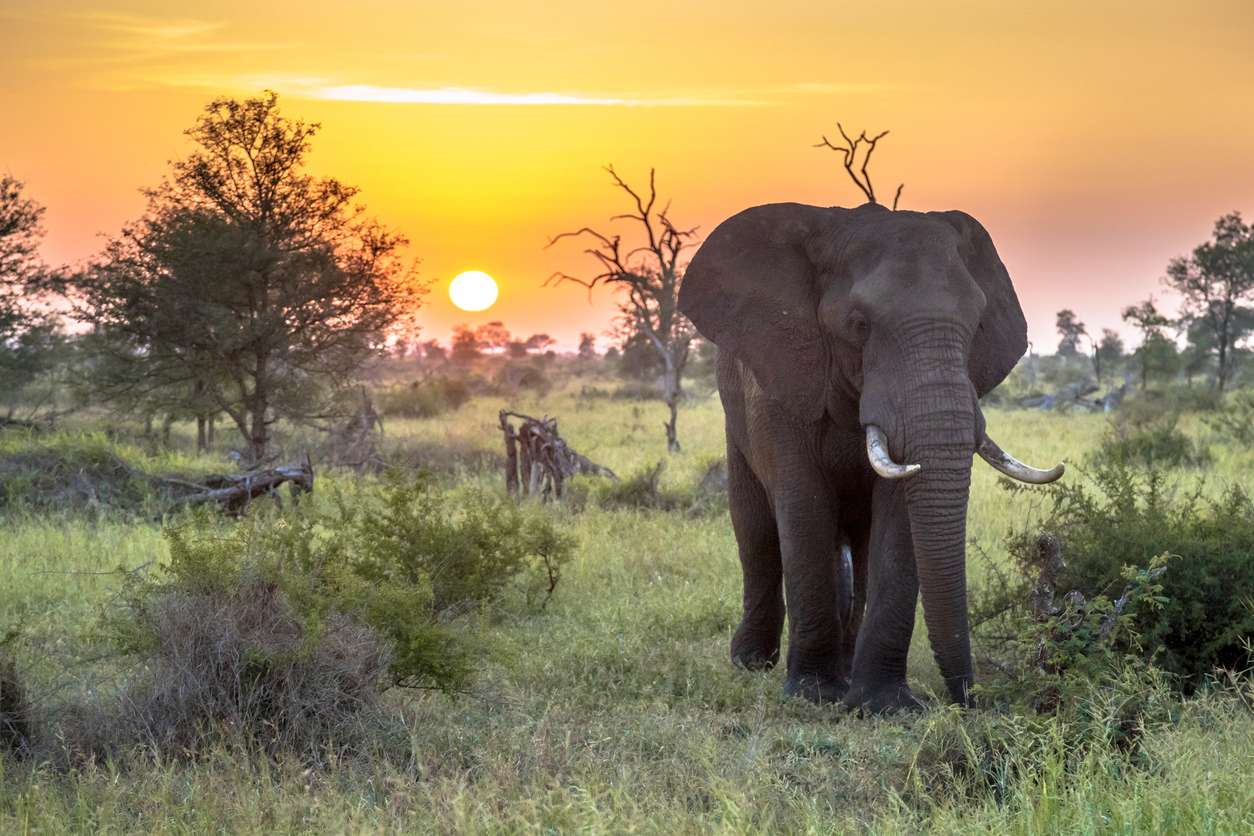 The bushveld is plains game country, where extensive ranching operations are often supplemented by controlled hunting. About 80% of South Africa’s game hunting industry is found in Limpopo. One of South Africa’s poorest provinces, it is rich in wildlife, which gives it an edge in attracting tourists. Both the private and public sectors are investing in tourism development.

Big 5 Territory, Elephant and buffalo are regularly seen in the Dry season and hippos and crocodiles can usually be spotted in the rivers. Roan, Sable, Black Impala, Eland, Golden Wildebeest, Nyala can also be found.

North West is an inland South African province that borders Botswana. Its landscape is defined by mountains in the northeast and bushveld scattered with trees and shrubs. The province is home to Sun City, an upscale resort with hotels, a casino, and a water park with a massive wave pool. Nearby is Pilanesberg National Park, with an extinct volcano and more than 7,000 animals, including lions and elephants. 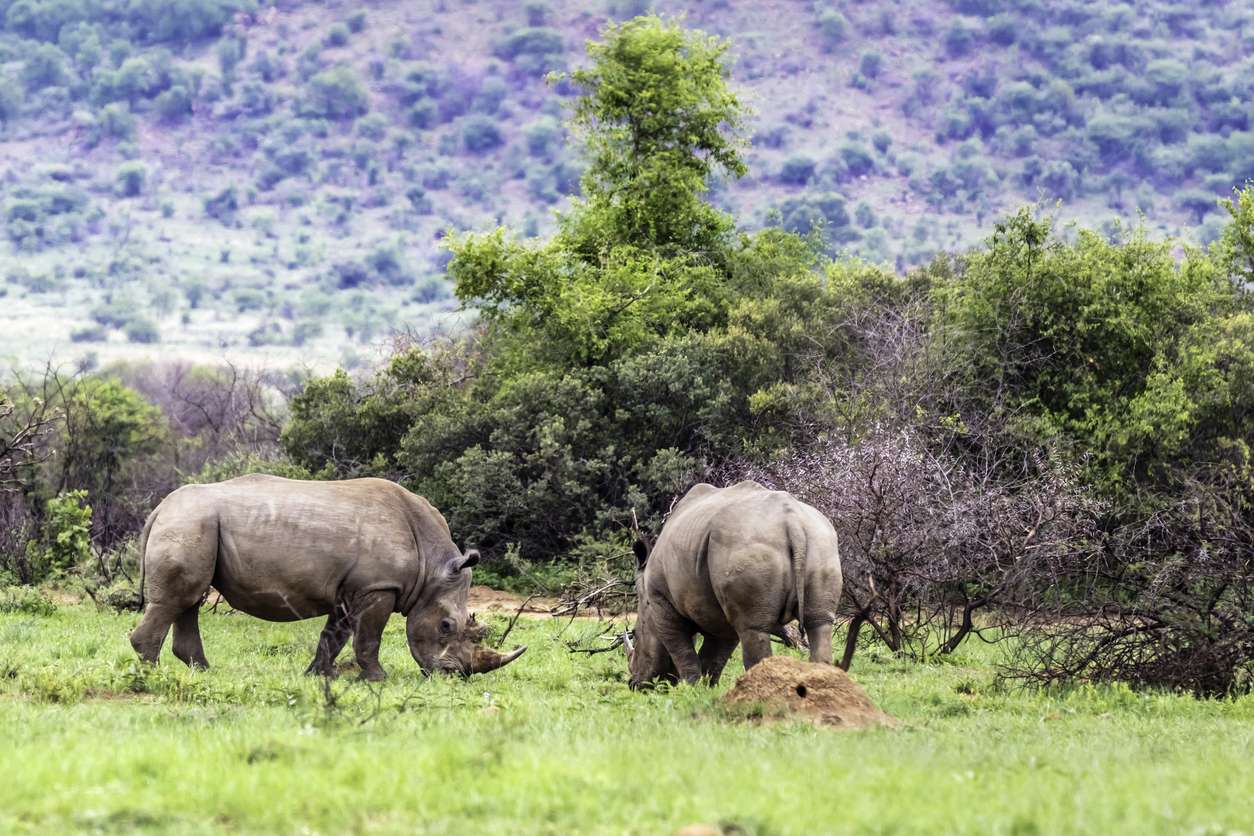 Free State, province, east-central Republic of South Africa. Under the name Orange Free State, it was originally a Boer state and then (from 1910) one of the traditional provinces of South Africa; it was renamed Free State in 1995. A wonderful, natural attraction in the region is the Soetdoring Nature Reserve near Bloemfontein, where visitors can see the African wildcat, black wildebeest, zebra, eland, white rhino and wild dog. The grassy plains in the south of the reserve provide ideal conditions for large herds of plain game such as black wildebeest and springbok. The northern section is home to kudu, red hartebeest, white rhino and buffalo.

The province is located on the Highveld, a plateau rising to elevations of 6,000 feet (1,800 m) in the east and sloping to about 4,000 feet (1,200 m) in the west. Two streams drain the province: the upper Orange River, which forms the province’s southern boundary, and the Vaal River, part of its northern boundary. The climate varies from warm and temperate with an annual rainfall of 40 inches (1,020 mm) in the east to semiarid with rainfall of only 15 inches (380 mm) in the far west. Mean annual surface temperatures gradually increase from about 58° F (14° C) in the east to 62° F (17° C) in the west. Frost is common over the entire province from May to September, and, because rainfall is unreliable, long periods of drought are frequent. 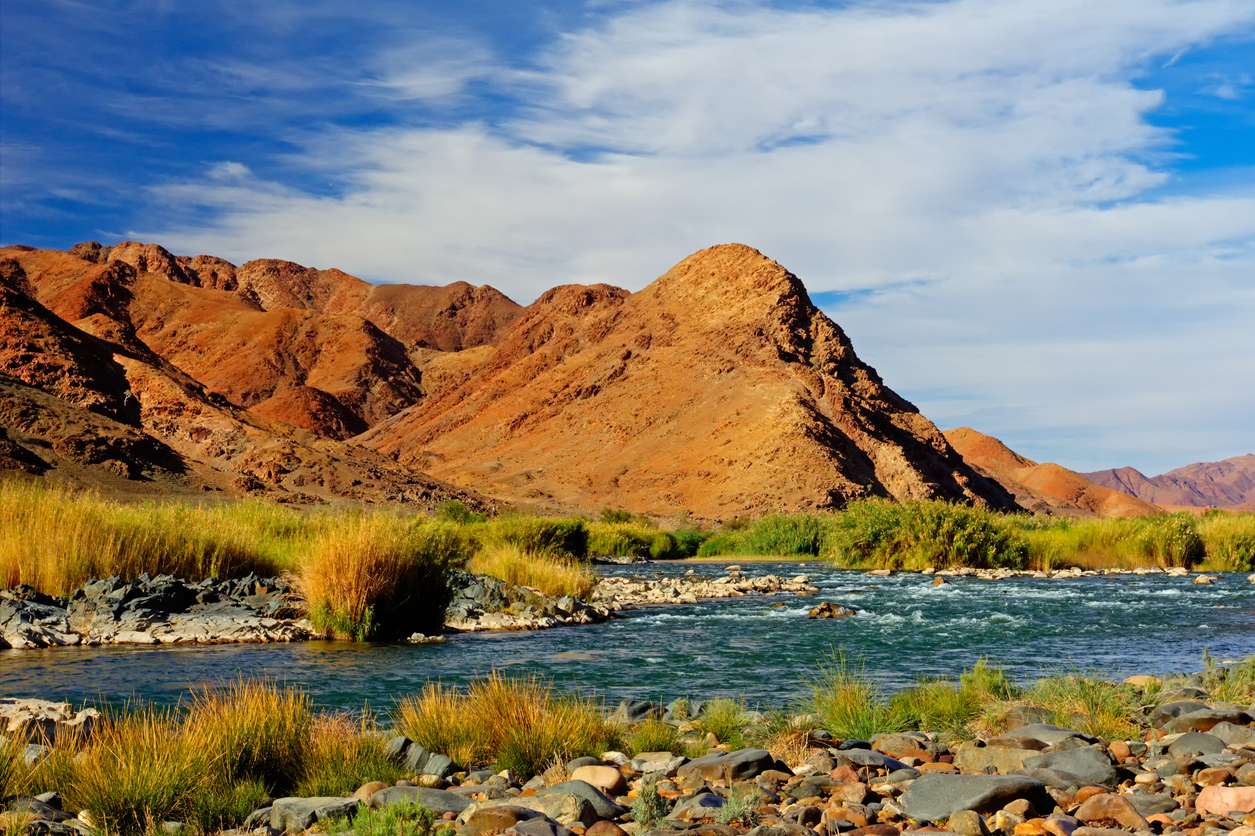 The Northern Cape is South Africa’s largest province, with desert landscapes, wildlife and gemstones. With Botswana, it shares Kgalagadi Transfrontier Park, whose red sand dunes shelter lions and falcons. Wild daisies and other springtime flowers carpet the typically arid plains of Namaqualand, a region stretching into Namibia. In Kimberley, the provincial capital, The Big Hole mine recalls the 1870s diamond rush. The Augrabies Falls is a waterfall on the Orange River, South Africa, within the Augrabies Falls National Park. The falls are around 183 feet in height. 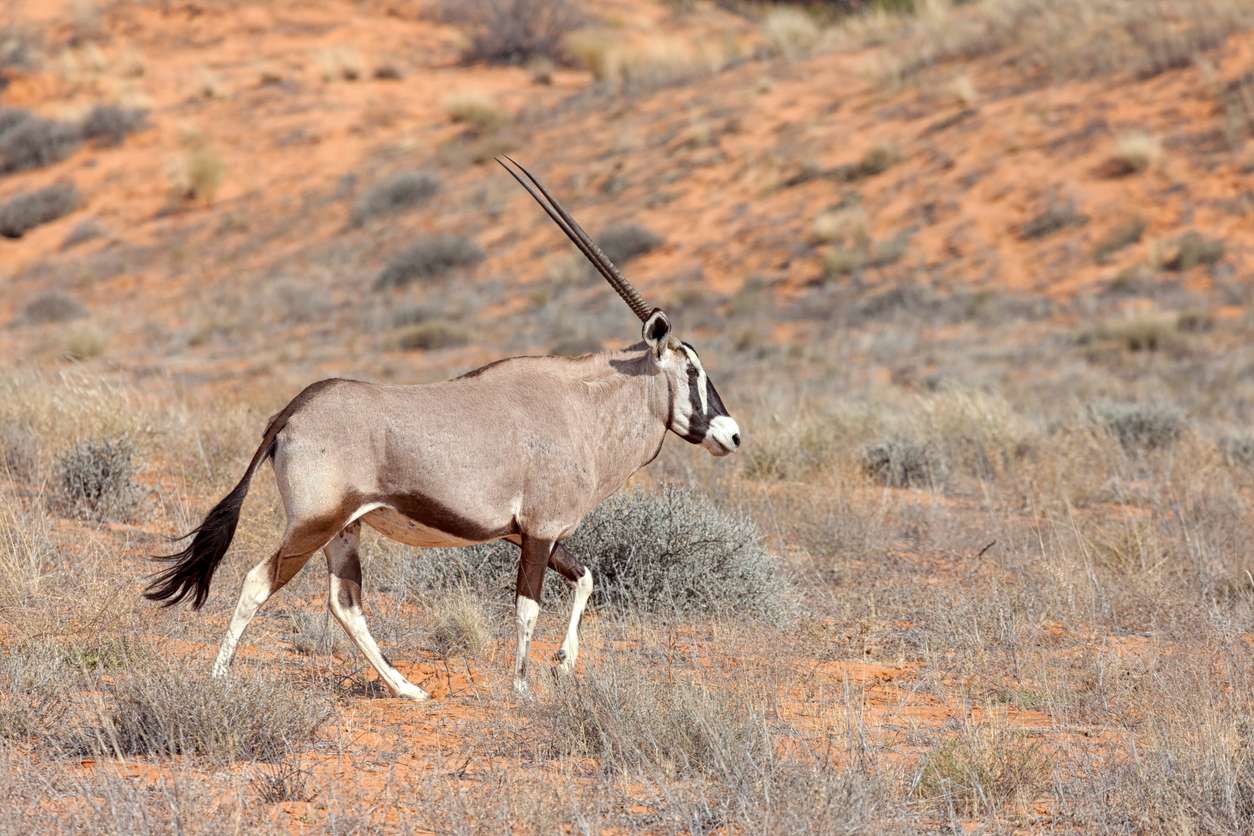 Wildlife is abundant and easily viewed thanks to the scant vegetation here. Beautiful black-maned Kalahari lions are the most iconic animal in this region, and the park also protects leopards; cheetahs; gemsbok; meerkats; and many species of birds, including sociable weavers, with their giant nests, and birds of prey.. 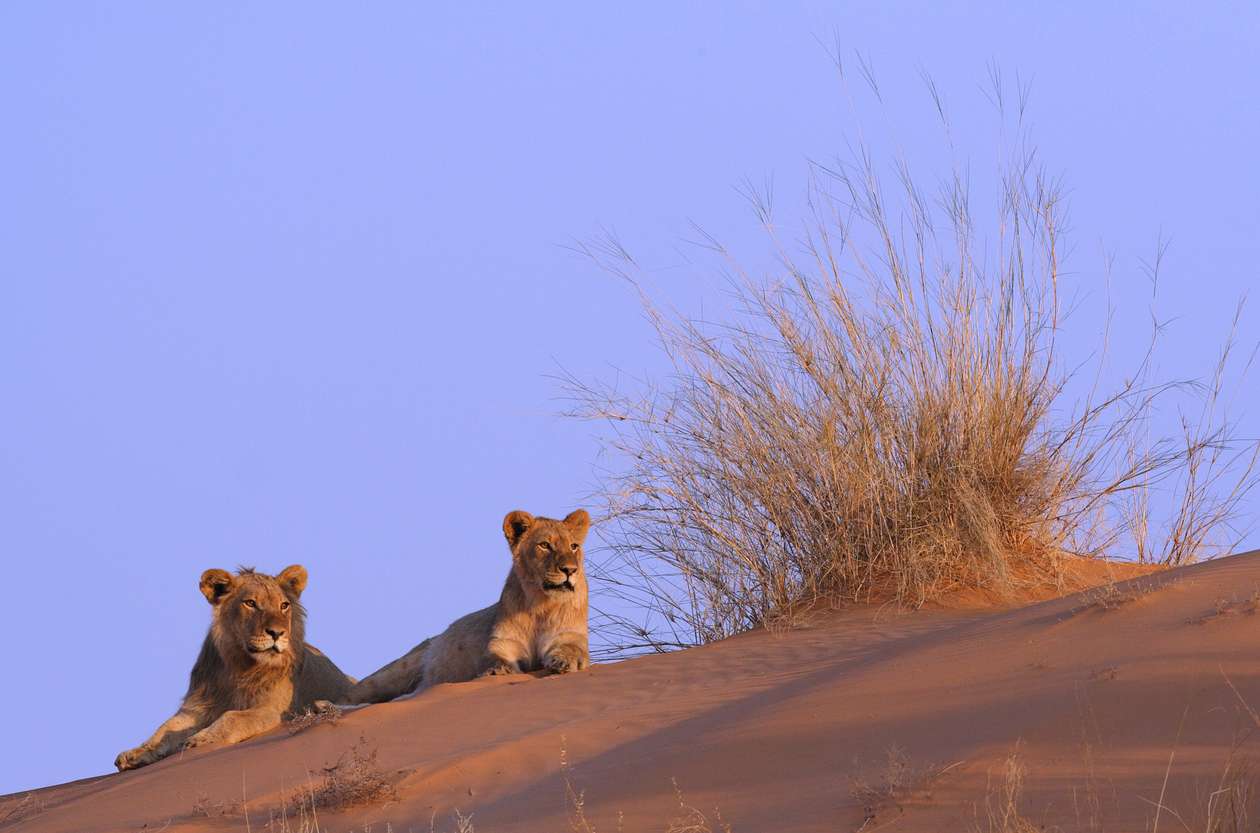 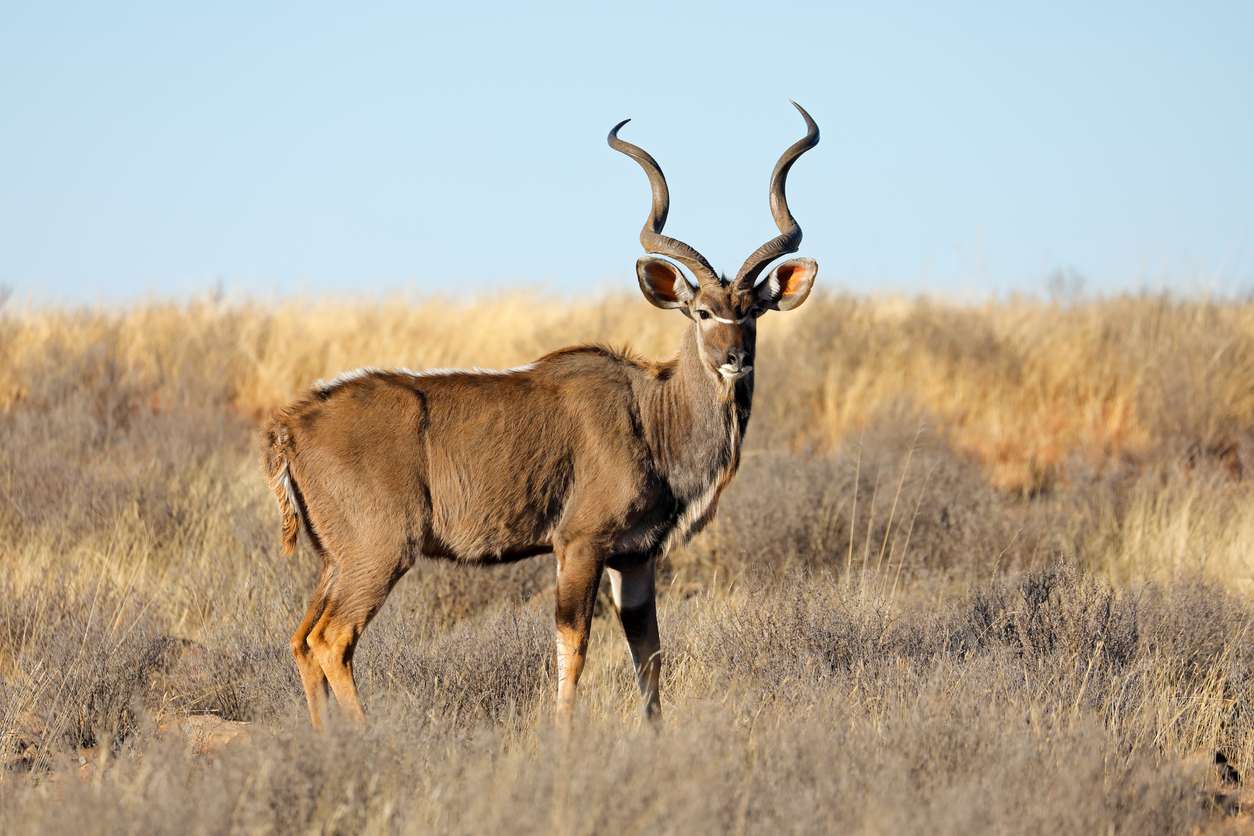 Eastern Cape is predominantly mountainous country. It includes the southern spur of the Drakensberg, rising to more than 9,000 feet (2,700 m) in the northeast, and descends southward from the great interior plateau (Highveld) of southern Africa to form a relatively narrow coastal plain along the Indian Ocean. Southwest of the Highveld and the Great Fish River, the topography is characterized by east-west-trending mountain ranges and valleys. East of the Great Fish River, including the lower valley of the Great Kei River, perennial streams have carved deep valleys on their way to the ocean. The province’s natural vegetation is largely grassveld, with some forest on the coast west of Humansdorp. Mountain Zebra National Park is located west of Cradock, and Addo Elephant National Park is located north of Port Elizabeth. 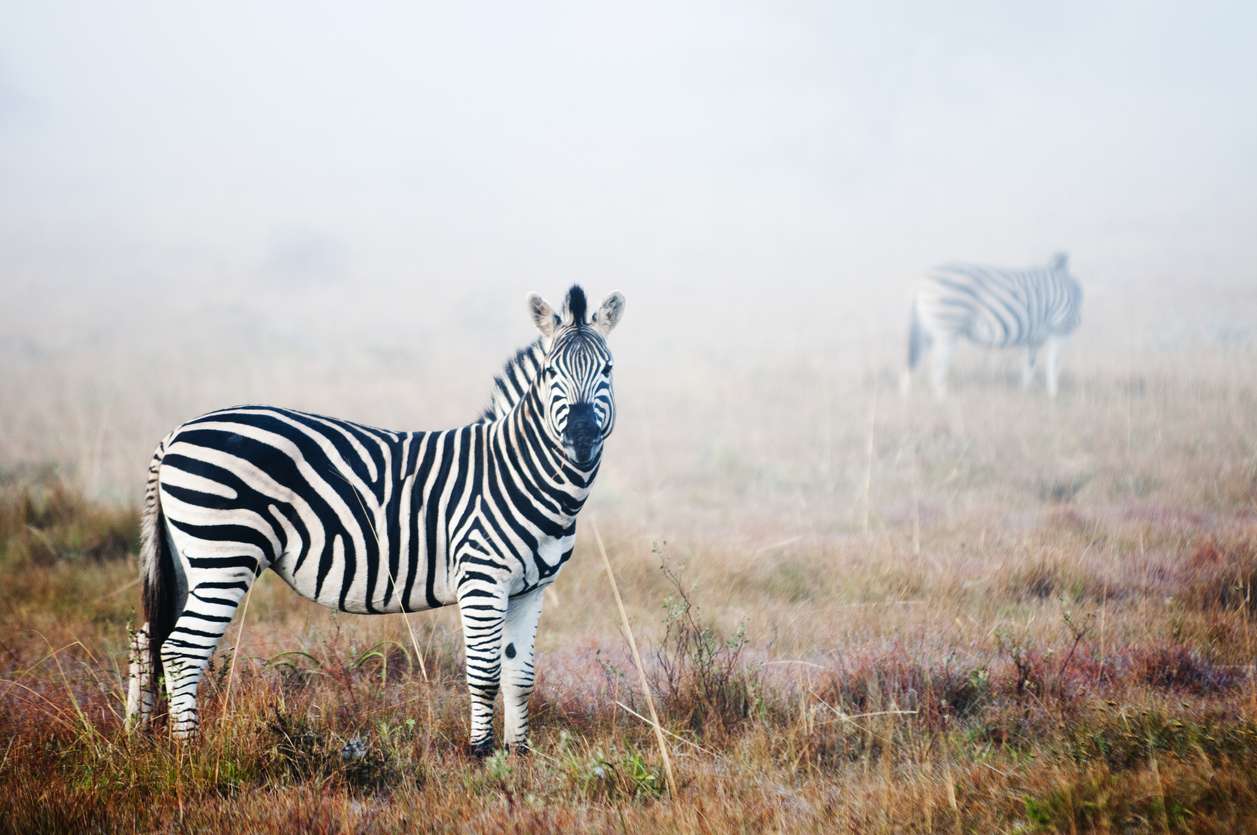 This nature reserve is situated across 14 kilometres of coastline, covering 2 500 hectares in total. View Southern right whales and dolphins and sight land creatures such as grysbok, bushbuck, bushpig. Goukamma has more than 220 species of birds. 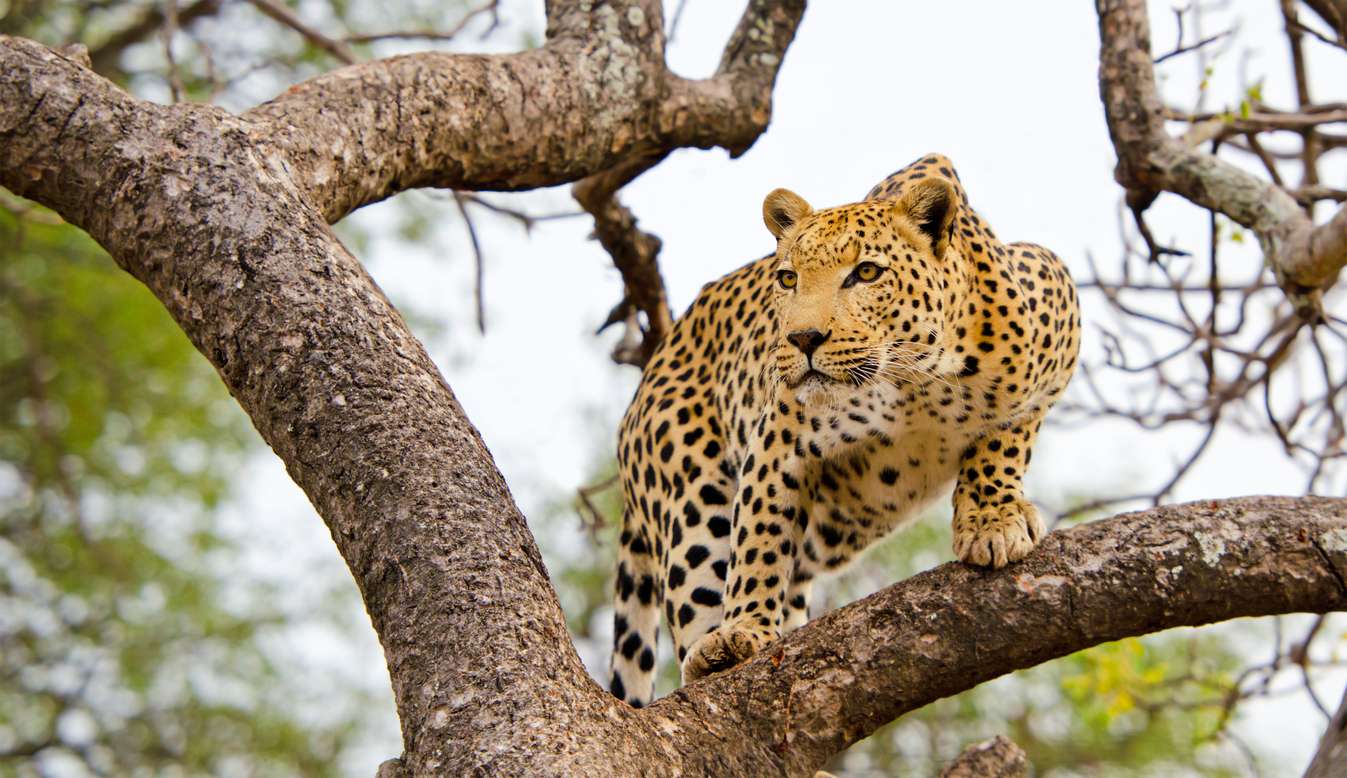